In 2012, designer Olafur Eliasson launched a humanitarian program called Little Sun in effort to bring clean, reliable, and affordable energy to the billions of people living without electricity worldwide.

In collaboration with Ikea, Eliasson has extended his effort to expand energy access and inspire global climate action. Together, the Icelandic-Danish designer and Funiture giant have developed a collection of solar gadgets, dubbed Sammanlänkad.

Sammanlänkad is comprised of a set of solar energy stores intended to function as interior lights and charging docks. The structure was designed to hang and consume solar energy projected through windows during daylight hours for use in the evening.

Eliasson hopes that harvesting solar power at home will encourage people to think about their energy usage, and give them “a voice, agency, and the power” to help in the fight against climate change.

“The thing that I think art is capable of is inspiring people, and giving them the mandate to say ‘I’m not just going to be a consumer, I’m also going to be a co-producer, I’m going to be a part of this movement and I’m going to do something myself, even on a tiny microscopic level’,” said Eliasson, in a talk to introduce the project during Democratic Design Days at the IKEA headquarters in Älmhult, Sweden.

Sammanlankad will be released in all Ikea markets in 2021 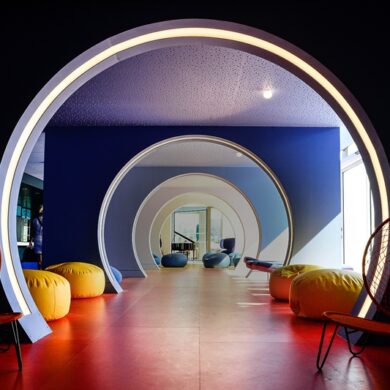